2019-09-23By editorPosted in Pagodas and landscapes, Recommended spots

The diverse natural resources together with the unique and massive cultural treasures spanning 4000 years of national history contribute to making Vietnam tourism become more popular with 22 heritages honored by UNESCO.

All Vietnam world cultural heritage sites carry distinctive characteristic that is nowhere to be found.

In 1994, UNESCO was officially recognizing Ha Long Bay as a World Natural Heritage Site by its exceptional landscape value. In 2000, Ha Long Bay was further recognized by UNESCO as a World Geological Heritage for its geography, substance, and geomorphology.

Phong Nha – Ke Bang National Park is located in Quang Binh Province – Central Vietnam with a total area of 343,300 ha. Besides the historical values of geology, topography, and geomorphology, Phong Nha – Ke Bang is also blessed with natural and majestic landscapes, especially Son Doong Cave is the largest natural cave in the world.

On October 3, 2010, the profile “Dong Van Karst Plateau Geopark” was officially recognized by UNESCO’s Global Geopark Network (GGN) Advisory Council as Global Geopark. This is currently the only title in Vietnam and the second in Southeast Asia.

1. The Complex Of Hue Ancient Relics

The complex of Hue Ancient Relics or Hue Monument Complex includes the historical-cultural relics built by the Nguyen Dynasty during the period from the beginning of the 19th century to the first half of the 20th century in Hue Imperial Capital and other surrounding areas. Most of these monuments are now under the management of Hue Monuments

Conservation Center and were recognized by UNESCO as World Cultural Heritage on December 11, 1993.

Today, Hoi An Ancient Town is a special example of a traditional Southeast-Asia port that is preserved completely and carefully. Most of the houses located along the narrow streets here have the traditional architecture from the 17th century to the 19th century.

Hoi An is also a cultural mixing pot where the shops and temples bearing traces of Chinese people are among the Vietnamese traditional townhouses and accommodations with French architectural style. With various outstanding values, at the 23rd meeting on December 4, 1999, UNESCO recognized Hoi An Ancient Town as a World Cultural Heritage.

My Son Sanctuary, located in Duy Phu commune, Duy Xuyen district, Quang Nam province, is a complex of Cham temples in a valley about 2 km in diameter surrounded by mountains.

Formerly, this was a place to organize sacrifices as well as a tomb of the Cham kings or princes. In 1999, My Son Sanctuary was selected as one of the modern UNESCO World Heritage Sites.

Thang Long Royal Citadel is a complex of relics associated with the history of Thang Long – Dong Kinh city and Hanoi starting from the pre-Thang Long-period (An Nam colonial period in the 7th century) to the Dinh – Tien Le period. The citadel also thrived under the Ly – Tran – Le dynasties and the Nguyen dynasty. T

his is a huge architectural work, built by the kings in many historical periods and became the most important relic in the system of Vietnamese monuments. On July 31, 2010, UNESCO passed a resolution recognizing the Thang Long Imperial Citadel – Hanoi as a World Cultural Heritage.

5. The Citadel Of The Ho Dynasty

The Citadel of The Ho Dynasty, now in Thanh Hoa province, is a fortified citadel with the unique large-scale stone architecture rarely found in Vietnam.

On June 27, 2011, after 6 years of submitting the dossier, the Ho Dynasty Citadel was recognized by UNESCO as a World Cultural Heritage.

Hue Royal Court Music is a type of music of the feudal court, performed on festivals (coronation, death, and other solemn festivals) during the year of the Nguyen Dynasty.

Hue Royal Court Music was recognized by UNESCO as a Masterpiece of the Intangible Heritage of Humanity in 2003.

Cultural Space of Tay Nguyen Gong was recognized by UNESCO as a Masterpiece of the Intangible Heritage of Humanity on November 15, 2005. Together with Hue Royal Court Music, this is the second Intangible Cultural Heritage of Vietnam received this title.

On September 30, 2009, UNESCO officially recognized Quan Ho as an Intangible Cultural Heritage of the world.

Ca Tru Singing is a traditional art in the North of Việt Nam combining with several ethnic instruments. Ca Tru Singing has been popular since the 15th century and used to be a type of court music loved by nobility and intellectuals. Ca Tru is a collaboration between poetry and music.

On October 1, 2009, at the 4th session of the Intergovernmental Committee of the UNESCO Convention on the Protection of Intangible Cultural Heritage ( from September 28 to October 2, 2009), Ca Tru has been recognized as Intangible Heritage in need of urgent protection.

Giong Festival is a traditional festival held every year in many locations in Hanoi to commemorate and praise the victory of the legendary hero Thanh Giong, one of the four immortals of Vietnamese folk beliefs.

In 2010, Giong festivals in Phu Dong temple (Gia Lam) and Soc temple (Soc Son district) were recognized by UNESCO as an Intangible Cultural Heritage of Mankind.

Xoan Singing is also known as Khuc Mon Dinh (singing at the door of the communal house). In the old days, Van Lang people organized Xoan singing contest in the spring to welcome New Year.

In 2011, the Xoan singing was recognized by UNESCO as an Intangible Cultural Heritage of Mankind.

Worship of Hung Vuong is a kind of traditional belief that has been handed down for a long time in Vietnam, mostly in Phu Tho province. This belief has been registered in the List of National Intangible Cultural Heritage (stage 1) by the Ministry of Culture, Sports and Tourism of Vietnam and was recognized by UNESCO as an Intangible Cultural Heritage of humanity in 2012.

Don Ca Tai Tu – the folk music in Southern Vietnam has been recognized by UNESCO as an Intangible Cultural Heritage in 2013. It was formed and developed from the late 19th century, originating from Festival music, Hue royal music and folklore.

Nghe Tinh Vi-and-Giam Folk Singing is a type of folk performance art, which plays an important role in the cultural life of the people in Nghe An and Ha Tinh provinces in central Vietnam. The folk songs have been recognized by UNESCO as an Intangible Cultural Heritage on November 27, 2014, in Paris (France).

With special cultural and historical values, in early March 2010, 82 stone steles of the examinations under the Le – Mac Dynasty (1442-1779) at the Van Mieu – Quoc Tu Giam (Hanoi) became UNESCO a World Documentary Heritage.

Vinh Nghiem Pagoda was knowns as the “Great Ancient Temple” -the largest Buddhist center of the Tran dynasty, where the Chinese texts were recognized by UNESCO in 2012.

4. Chau Ban Of The Nguyen Dynasty

The Nguyen Dynasty’s Chau Ban was recognized by UNESCO as a World Documentary Heritage in 2014.

Trang An is one of the most beautiful and charming karsts in the world. Covering the landscape are majestic forests and 200m-tall conical towers with closed narrow pits, surrounded by interconnected mountain ridges and marshes connected through a system of one-kilometer subterranean streams.

Besides, this place also owns a scenic spot that has been ranked as an important national monument by the Vietnamese Government such as Trang An eco-tourism area, Tam Coc-Bich Dong, Bai Dinh pagoda, Hoa Lu ancient capital. On June 23, 2014, in Doha, with the absolute agreement of the World Heritage Committee, Trang An Landscape Complex officially became Vietnam’s first Mixed-world Heritage site.

Those above details are about Vietnam World Cultural Heritage Sites. If you have the opportunity for Vietnam tourism, please once visit these landscapes. 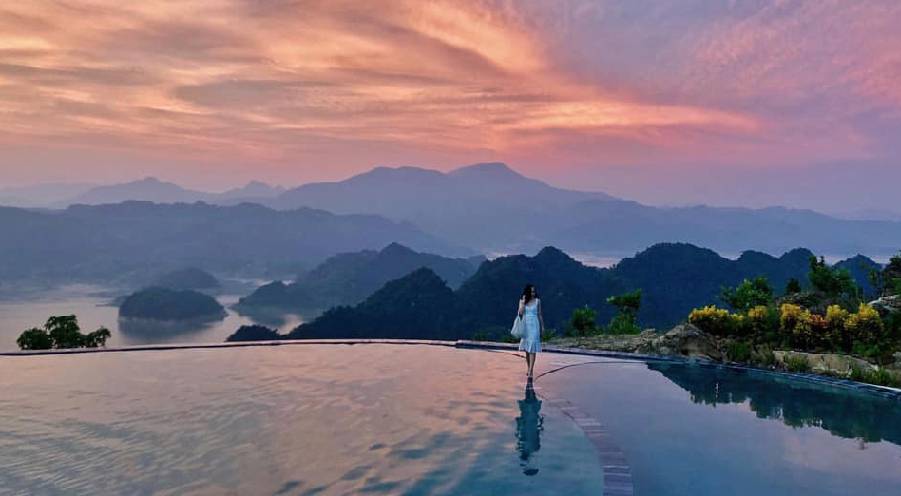 Nestled between two wonderful fairy-tale places crowded with tourists Mai Chau and Moc Chau, the unexplored Ba Khan is likened to a forgotten underworld paradise in the Northwest […] 1. Brief introduction about Suoi Tranh tourist area Suoi Tranh is a tourist area, located on Phu Quoc island, with many interesting things. It is about 9km from […]